Do you consider yourself charitably inclined? Do you frequently support charitable causes or organizations? According to the Giving USA 2018 Annual Report on Philanthropy, Americans gave a combined $410.02 billion to charities during 2017. While charitable giving is often seen as an ideal way for individuals to give back to the communities they live and work in, many may not be aware of all of the potential tax benefits and write-offs available to donors. What changed under the new tax law?

Under prior law, charitable contributions were generally limited to either 50% (cash contributions) or 30% (capital gain property) of the taxpayers’ Adjusted Gross Income (AGI). Under the new law, the AGI limitation for cash contributions increased from 50% to 60% for tax years beginning after 2017 and before 2026. 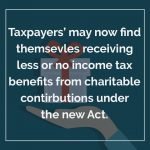 While the Act slightly enhanced the charitable contribution deduction, the Act limited (in some cases severely) other itemized deductions, as well as nearly doubling the standard deduction. Due to those changes, more taxpayers are likely going to find themselves claiming the standard deduction instead of itemized deductions. Thus, taxpayers’ may now find themselves receiving less or no income tax benefits from charitable contributions under the new Act.

What strategies can I employ to maximize the tax benefits of my charitable contributions?

The first potential strategy involves grouping contributions together in a single year in order to maximize your total itemized deduction over and above the standard deduction for that year. For example, if you typically contribute to a particular charity each year, consider giving that organization multiple years’ worth of contributions in a single year if you are financially able to do so. Especially in a year with higher than normal taxable income (this strategy also works with other types of still deductible itemized deductions, most notably medical expenses).

The second strategy involves retired taxpayers over age 70 ½ who are also required to receive a Required Minimum Distribution (RMD) from a traditional IRA. In this scenario, as was the case prior to the new Act, those taxpayers are eligible to make a tax-free distribution of up to $100,000 per year directly from their IRA to an IRS qualified charitable organization.

While the taxpayer does not receive a charitable contribution deduction, they are now able to exclude the otherwise taxable RMD from their taxable income, which generally results in a more favorable outcome. This can be especially helpful for taxpayers receiving large RMD’s who also have charitable contributions that are limited based on the AGI limitation. Also, taxpayers who now claim the standard deduction and are no longer able to claim the charitable deduction.

Who should I talk to further about my charitable contributions?

These are only a few strategies you might consider. If you would like to discuss your charitable giving efforts in more detail, or discuss other potential options, please contact us our offices to discuss further. 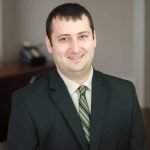 Derek McCarty began his career in accounting with Yount, Hyde & Barbour in 2011 after a graduating with a B.S. in accounting from Shepherd University.  Derek became a licensed CPA in 2013. As a member of the firm’s Family Legacy Services team, Derek has developed an in-depth understanding of individual, trust, estate and business taxation. Derek stays up-to-date with the latest trends and regulations, regularly attending courses specifically designed towards matters affecting his clients.  Derek also assists with providing tax training and ongoing mentoring to YHB staff members.