It’s not too late to take steps to significantly reduce your 2016 business income tax bill and lay the groundwork for tax savings in future years. Here’s a summary of some of the most effective year-end tax-saving moves for small businesses under the existing Internal Revenue Code. After President Obama hands over the baton to President-elect Trump and new members of Congress are sworn into office in January, the tax laws could change. But here’s what we know now.

If your business operates as a sole proprietorship, S corporation, limited liability company (LLC) or partnership, your share of the net income generated by the business will be reported on your Form 1040 and taxed at your personal rates. If the new Congress maintains the status quo, individual federal income tax rate brackets for 2017 will be about the same as this year’s brackets (with modest increases for inflation).

On the other hand, if your business is healthy, and you expect to be in a significantly higher tax bracket in 2017 (say, 35% vs. 28%), take the opposite approach. Accelerate income into this year (if possible) and postpone deductible expenditures until 2017. That way, more income will be taxed at this year’s lower rate instead of next year’s higher rate.

Important note: The results of the election could affect tax rates and regulations in the future. Individual tax rates in 2017 and beyond could be higher or lower than under current law.

If your business operates as a regular C corporation, corporate tax rates for 2017 are scheduled to be the same — again, assuming the new Congress makes no tax law changes. So, if you expect your corporation to pay the same or lower rate in 2017, you should plan to defer income into next year and accelerate deductible expenditures into this year. If you expect the opposite, accelerate income into this year, while postponing deductible expenditures until next year.

Looking for easy ways to defer income and accelerate deductible expenditures? If your small business uses cash-method accounting for tax purposes, it can provide flexibility to manage your 2016 and 2017 taxable income to minimize taxes over the two-year period. Here are four specific cash-method moves if you expect business income to be taxed at the same or lower rates next year:

1. Before year end, charge on your credit cards recurring expenses that you would otherwise pay early next year. You can claim 2016 deductions even though the credit card bills won’t be paid until next year. However, this favorable treatment doesn’t apply to store revolving charge accounts. For example, you can’t deduct business expenses charged to your Sears or Home Depot account until you actually pay the bill.

2. Pay expenses with checks and mail them a few days before year end. The tax rules say you can deduct the expenses in the year you mail the checks, even though they won’t be cashed or deposited until early next year. For big-ticket expenses, send checks via registered or certified mail. That way, you can prove they were mailed this year.

3. Prepay some expenses for next year, as long as the economic benefit from the prepayment doesn’t extend beyond the earlier of: 1) 12 months after the first date on which your business realizes the benefit, or 2) the end of 2017 (the tax year following the year in which the payment is made). For example, this rule allows you to claim 2016 deductions for prepaying the first three months of next year’s office rent or prepaying the premium for property insurance coverage for the first half of next year.

4. On the income side, the general rule for cash-basis taxpayers is that you don’t have to report income until the year you receive cash or checks in hand or through the mail. To take advantage of this rule, hold off sending out some invoices at year end. That way, you won’t get paid until early next year. Of course, you should never do this if it raises the risk of not collecting the cash.

When should you take the opposite approach? If you expect to pay a significantly higher tax rate on next year’s business income, try to use the opposite strategies to raise this year’s taxable income and lower next year’s. Be sure to factor into the equation your expectations about how the election results will affect taxes in future years.

Purchasing a gas-guzzling SUV, pickup or van for your business may be seen by some as bad for the environment. But these vehicles can be useful if you need to haul people, equipment and other things around as part of your day-to-day business operations. They also have major tax advantages.

Under the Section 179 election, you can elect to immediately write off up to $25,000 of the cost of a new or used heavy SUV that’s: 1) placed in service by the end of your business tax year that begins in 2016, and 2) used over 50% for business during that year.

If the vehicle is new, 50% first-year bonus depreciation allows you to write off half of the remaining business-use portion of the cost of a heavy SUV, pickup or van that’s: 1) placed in service in calendar year 2016, and 2) used over 50% for business during the year.

After taking advantage of the preceding two breaks, you can follow the “regular” tax depreciation rules to write off whatever is left of the business portion of the heavy SUV’s, pickup’s or van’s cost over six years, starting with 2016.

To cash in on this favorable tax treatment, you must buy a “heavy” vehicle, which means one with a manufacturer’s gross vehicle weight rating (GVWR) above 6,000 pounds. First-year depreciation deductions for lighter SUVs, light trucks, light vans and passenger cars are much skimpier. You can usually find a vehicle’s GVWR specification on a label on the inside edge of the driver’s side door where the hinges meet the frame. 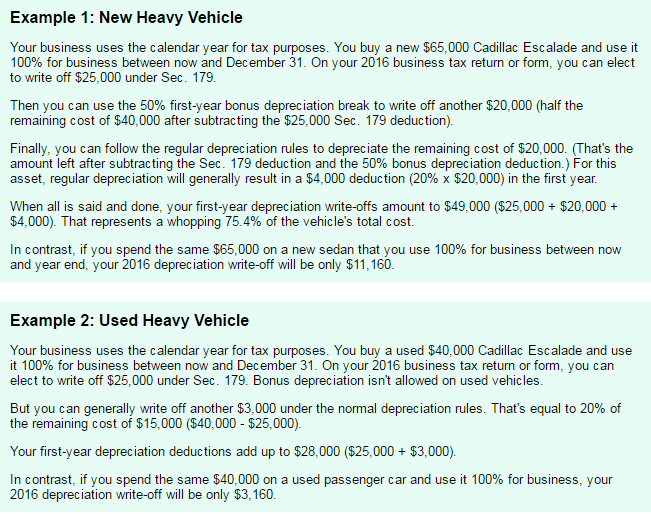 You may not be eligible to claim Sec. 179 deductions if you have a tax loss for the year (or close to it). Sec. 179 can’t be used to create an overall business tax loss. This is the so-called business taxable income limitation.

Sec. 179 is even more generous for other types of fixed assets, such as equipment, software and leasehold improvements. For tax years that begin in 2016, the maximum Sec. 179 first-year depreciation deduction is $500,000. This amount will be adjusted for inflation in future years.

Thanks to this tax break, many small and medium-size businesses can immediately deduct most (or all) of their new and used fixed asset purchases in the current tax year. This can be especially beneficial if you buy a new or used heavy long-bed pickup and/or heavy van to be used over 50% in your business. Unlike heavy SUVs, these heavy vehicles aren’t subject to the $25,000 Sec. 179 deduction limitation. That means you can probably deduct the full business percentage of the cost on this year’s federal income tax return.

Real property improvements have traditionally been ineligible for the Sec. 179 deduction. However, an exception that started in 2010 has been made permanent for tax years beginning in 2016. Under the exception, you can claim a first-year Sec. 179 deduction of up to $500,000 (adjusted for inflation in future years) for the following qualified real property improvement costs:

For qualified new assets (including software) that your business places in service in calendar year 2016, you can claim 50% first-year bonus depreciation. (Used assets don’t qualify.) This break is available for the cost of new computer systems, purchased software, machinery and equipment, and office furniture.

For QSBC stock that was acquired after September 27, 2010, a 100% federal gain exclusion break is potentially available when the stock is eventually sold. That equates to a 0% federal income tax rate if you sell the shares for a gain.

To qualify for this break, you must hold the shares for more than five years. In addition, this deal isn’t available to C corporations that own QSBC stock. Finally, many companies won’t meet the definition of a QSBC in the first place, and the gain exclusion break could be on the chopping block when the new Congress convenes early next year.

These are just some of the tax-planning strategies available to help small business owners lower their taxes. Before implementing any of these strategies, consult your tax advisor to discuss the details and limitations, as well as other creative tax-saving alternatives. Your tax advisor is closely monitoring any tax law changes and will let you know when (and if) circumstances change.

All of our offices will be closed starting at noon on Wednesday, November 24th. We will reopen for normal business hours on Monday, November 29th.