November 29, 2016, is Giving Tuesday. Never heard of it? Known on social media as #GivingTuesday, the Tuesday after Thanksgiving has grown into one of the biggest fundraising drives for the not-for-profit industry. 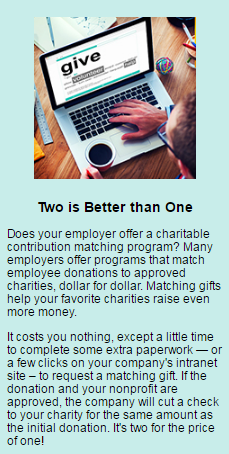 Similar to Cyber Monday, it’s a day when charities encourage people to make year-end donations using their computers and mobile devices. Blackbaud, a software developer for not-for-profits, expects 2016 to be a record-breaking year. Here’s more about this event — and how you can deduct contributions to your favorite charitable organization on your 2016 tax return.

Charities Turn to the Internet

Overall, not-for-profits experience spikes in financial contributions and volunteer hours during the holiday season. Although you can’t deduct the time you spend volunteering, donations of cash and other assets may be deductible on your 2016 federal tax return if you follow the IRS rules.

First and foremost, you must itemize deductions to deduct charitable contributions. Additionally, your contributions must be made to “qualified” organizations. To see whether an organization qualifies, visit the IRS’s online search tool, Exempt Organizations Select Check. Giving money to an individual or a foreign organization generally isn’t deductible, except for donations made to certain qualifying Canadian not-for-profits.

Clothing and household items donated to charity generally must be in good used condition or better. However, this requirement may be waived for deductions of clothing or household items of more than $500 if you include a qualified appraisal with the return. Household items include furniture, electronics, appliances and linens.

If a contribution entitles you to merchandise, goods or services, including admission to a charity ball, banquet, theatrical performance or sporting event, you can deduct only the amount that exceeds the fair market value of the benefit received.

IRS substantiation rules vary depending on how much you’re claiming for each contribution:

Gifts of $250 or more (cash or property). You must obtain and keep in your records a contemporaneous written acknowledgment from the qualified organization (in other words, a receipt).

The acknowledgment must state whether the organization provided goods or services in exchange for the gift. If so, the nonprofit must provide a description and good faith estimate of the value of the goods or services. One document from an organization can satisfy both the written communication requirement for monetary gifts and the contemporaneous written acknowledgment requirement for all contributions of $250 or more.

Deductions related to noncash contributions worth more than $500. IRS Form 8283 must be filled out and attached to your return. For each item, you’re also required to maintain written records that include:

The approximate date the property was acquired and how you acquired it,

A description of the property,

The cost or other basis of the property,

The fair market value of the property at the time it was contributed, and

The deduction for a motor vehicle, boat or airplane donated to charity is usually limited to the gross proceeds from its sale. This rule applies if the claimed value is more than $500. IRS Form 1098-C or a similar statement must be provided to you by the organization and attached to your tax return.

Deductions related to contributions of noncash property worth more than $5,000. Unless you’re giving publicly traded securities, you must obtain a qualified appraisal. (The threshold is $10,000 for nonpublicly traded securities.) If you claim a deduction for a contribution of noncash property worth more than $500,000, you must attach the qualified appraisal to your return.

Contributions are deductible in the tax year they’re made, but many people put off donating until the last minute. Fortunately, you have until December 31 to donate for the 2016 tax year. Donations made online, by phone or via social media that are charged to a credit card on or before midnight on December 31 count for 2016 — even if the bill isn’t paid until 2017. Mailed checks also count for 2016 as long as they’re postmarked no later than December 31.

If you plan to deduct a sizable charitable contribution on your 2016 tax return, consult with your tax advisor before year end to ensure you’re following all the rules.