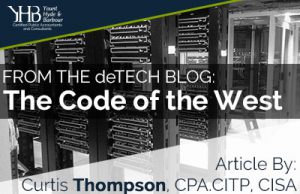 When most of you decided on a career, I doubt you thought much about ethics. Your choices probably were influenced by your personal code of ethics, meaning you weren’t going to pursue a career that you weren’t comfortable with. However, you probably didn’t decide on your career based on how much you would face ethical decisions.

Companies today have the ability to collect and process vast amounts of data on our clients. If we look back 50 years ago processing data was, for the most part, a manual process. You didn’t collect that much data about a person because there was not that much to collect and you had nothing you could do with it anyway. Today we collect unbelievable amounts of data and there are both legal and ethical issues about how we use that data. I think we face more ethical decisions today than any time in the vast.

Your company has tons of data on your clients. How you use this data is an ethical question. There are legal issues to guide some of the use but what about the data that may not be strictly regulated by law? That is where are ethics come in.

When I think about the things that have influenced my personal code of ethics, I obviously include my parents. My father was the most ethical and honest man I have ever met and my mother showed me how to stand on principals. Since they raised me, it is hard to find just a couple things that influenced me but the outside influences are fairly easy… Westerns (which is why I lead off this newsletter with the Code of the West.)

I have faith in people to generally do the right thing and I expect few of us will ever actually have to make a stand on a huge ethical decision. However, there are the small ones we face from time to time that will keep us up at night.

What do you do if you realize that the backup job, that you were responsible for, hasn’t run for the last few nights? First, you fix the problem and make sure you get a good back up. But what else do you do? Do you then tell the CIO or the Security Officer that it happened or do you just keep quiet and hope no one finds out? It could have been a mistake or just one of those technology things that just happen but you were responsible for those being done. If you don’t say anything, no one may ever know and if they do find out you can act as surprised as they are. Your decision says a lot about your ethics.

Now is the time to look back at the Code of the West. What would John Wayne or Jimmy Stewart do? If you are taking pride in your work, then you know it wasn’t just carelessness and those around you will know it as well. It takes courage to own up to an error whether it is your fault or not.

You can use ‘The Code’ to weigh your decision against your ethics. Whether it is an IT issue, how to handle vast amounts of data, or an accounting decision, pull out the Code of the West and think through your choices based on that. Just remember, you only have one reputation so use it wisely.