An unintended consequence of a provision in the Tax Cuts and Jobs Act (TCJA) that went into effect last year was the heavy increase in the taxation of military survivor benefits received by a child of U.S. service member who died while serving in a conflict (Gold Star family member).

Below I will explain the current rules and what is being done to correct them. If there was ever an issue for which our representatives need to set aside the biting politics of today, this is it. 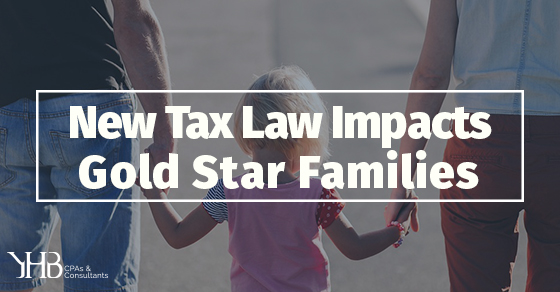 The “kiddie tax” generally applies to:

Earned income is defined as earnings from wages and self-employment. Unearned income includes such things as interest, dividends, capital gains, rental income and in this case, survivor benefits.

Currently there are 2 pieces of legislation that have been enacted. The Senate, on May 21, approved by unanimous consent, the Gold Star Family Tax Relief Act (S. 1370) which would remove tax increases on military survivor benefits under TCJA. This bill would treat military survivor benefits received by a child as earned income which would tax such benefits under the tax table for single taxpayer. The bill is being held by the Senate in the event the House passes an identical measure.

However, the House lawmakers incorporated their fix into a retirement bill, the Setting Every Community Up for Retirement Enhancement (SECURE) Act (H.R. 1994), which it overwhelmingly passed on May 23. This legislation provides incentives for retirement security by encouraging more businesses to offer retirement plans and expanding opportunities for workers to invest.

Like the Senate bill, it also provides relief for Gold Star families by treating military survivor benefits received by a child as earned income for tax years beginning after 2017. Unlike the Senate version, the House bill will also apply to families of first responders and emergency medical workers. The Senate has not indicated when it will take up this bill.

Encourage your House and Senate representative to work together reconcile these bills to support our Gold Star Families.

James Snyder, CPA, CSPM is a principal at YHB in the Leesburg, VA office. He provides income and estate planning services, business consulting, and estate and trust administration services to successful individuals in many professions, especially engineering, law, technology and real estate. He also provides strategic guidance and planning for clients involved in stock option transactions and wealth transfer.