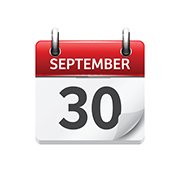 Here, we answer these questions and explain the importance of the fast-approaching deadline on September 30, 2016, that must be met to change beneficiaries for IRAs that were owned by individuals who died in 2015.

After an IRA owner’s death, the account beneficiary or beneficiaries must take RMDs each year. RMDs from traditional accounts are generally subject to tax (unless the beneficiary is tax-exempt, such as a charity, or the distribution is attributable to nondeductible contributions), and each withdrawal also reduces the amount left in the account that can continue to grow tax-deferred (or tax-free, in the case of a Roth IRA).

If the RMD rules aren’t followed for a tax year in question, the IRS can assess a penalty equal to 50% of the shortfall (the difference between the required amount and the amount that was actually withdrawn during the year, if anything). That’s one of the most expensive tax penalties on the books. So, complying with the RMD rules isn’t something that can be ignored with impunity.

an one individual is designated as a primary co-beneficiary. For RMD purposes, however, the beneficiaries of a deceased IRA owner’s account aren’t finalized until September 30 of the year following the account owner’s death. This rule allows for creative planning options to achieve better tax results for the beneficiaries. Here are some examples.

This rule isn’t optimal for a younger beneficiary who wants to stretch out the inherited IRA’s tax advantages by taking smaller RMDs over his or her longer life expectancy. Thankfully, IRS regulations allow a postmortem planning solution: After the IRA owner dies, the IRA can be divided into separate IRAs for each beneficiary.

However, any direct transfers to split up the account must be completed by September 30 of the year after the year of the IRA owner’s death. So if the owner died in 2015, the deadline to divide up the account for tax-saving results is September 30, 2016.

Once again, this rule isn’t optimal for a younger beneficiary who wants to stretch out the inherited IRA’s tax advantages by taking smaller RMDs over his or her longer life expectancy. Fortunately, again relief can be found in the IRS regulations allowing a deadline of September 30 of the year after the year of the IRA owner’s death to split the IRA into multiple accounts.

Here’s an example of the postmortem RMD planning permitted under this rule.

Uncle Henry was 73 years old when he died in 2015. His traditional IRA has two equal beneficiaries: son Iggy (age 53) and niece Jenny (age 38). Under the RMD rules that apply for 2016 and beyond, Jenny can achieve better tax results for her share of the inherited IRA if the account is split up into two accounts: one for her and one for Iggy. That way, Jenny can calculate her annual RMDs using her longer life expectancy figures, which will result in smaller RMD amounts and a longer tax-saving life for the inherited IRA. However, the IRA must be divided into separate accounts by no later than the upcoming deadline of September 30, 2016.

When the account is a Roth IRA. To calculate RMDs from an inherited Roth IRA, follow the rules for account owners who die before the RBD. Those rules apply regardless of how old the Roth IRA owner was when he or she died. Again, if there’s a younger beneficiary who’d like to take advantage of his or her longer life expectancy, the Roth IRA can be split up by the September 30 deadline.

Inherited IRAs with a Nonhuman Beneficiary

In this scenario, when the IRA owner dies before the RBD, the account must be completely liquidated by December 31 of the fifth year following the year of the account owner’s death. Obviously, the five-year rule curtails the tax-saving life of the inherited account for any human beneficiaries.

Unfortunately, this rule also results in less-than-optimal tax results for any human beneficiaries who are younger than the now-deceased account owner. They’ll have to take larger RMDs each year, which will deplete the tax-saving IRA more quickly.

Here’s an example of the postmortem RMD planning permitted under this rule.

Ken, age 32, is a 50% beneficiary of his mother Jan’s traditional IRA. Jan died last year at age 66 (before the RBD). The other 50% beneficiary is a charity. Therefore, Jan’s account is considered to have no beneficiary for RMD calculation purposes. Because Jan died before the RBD, the dreaded five-year rule will apply, which means curtailed tax deferral advantages for Ken. The charity doesn’t care about tax deferral because it’s tax-exempt.

The tax-savvy strategy in this situation is to distribute 50% of the IRA balance by September 30, 2016, to cash out the charity. That way, Ken can calculate RMDs for 2016 and beyond using his relatively long single life expectancy figures. He’s only 32 years old, so the tax deferral advantages of the inherited IRA will last much longer than if the RMDs had been calculated using his deceased mother’s life expectancy figures.

The September 30 deadline for finalizing beneficiaries can be an important consideration when trying to maximize the tax advantages of an inherited IRA for individual beneficiaries. That deadline is fast approaching for account owners who died in 2015. Contact your tax advisor to fully understand the impact of making beneficiary changes and make any tax-saving moves before it’s too late.